To Members of the House of Representatives and Senators

We call on the Australian Parliament to declare a climate emergency and to mobilise resources to restore a safe climate.

1. In February 2016, global temperatures spiked to well over 1.5°C above pre-industrial times, just weeks after the Paris Climate Agreement set an aim of not exceeding that benchmark. Climate scientists say that we are facing a climate emergency, and that the future of ecosystems and human civilisation now hang in the balance. Our Great Barrier Reef is dying as the oceans heat up and recent fires in Tasmania burned ancient world-heritage forests.

2. Declaring a climate emergency is a vital step in building support for the very large changes required to restore a safe, cooler climate.

3. A society-wide mobilisation of resources is required at a scale and speed not seen since the Second World War. Carbon emissions must be reduced to zero within a few years, not several decades, and we must draw down all the excess carbon dioxide already in the atmosphere using measures that include mass tree planting. We must rapidly transition from fossil fuels to 100% renewable energy, replacing fossil fuel jobs with jobs in renewable energy and energy efficiency.

The climate restoration is an enormous task, but given the risks to ourselves and future generations we must rise to the challenge.


When you sign the petition, you can also
report what you do to reduce emissions

Government-led resource mobilisation is only half of the solution. The other half is what you and I do. During the Queensland floods, Aussies were taking neighbours and strangers to safety, sharing resources, and doing whatever was needed right from the start of the emergency simply because they could.

Individuals and community groups are already taking initiative and using their own resources to restore a safe climate. Tell Parliament and everyone else what YOU are already doing to show how we are mobilising together for the common good.

Use the form below to sign the petition to Parliament.

If you wish, you can also add your climate actions. We’ll add the data from the climate action counters when we submit the petition because we believe it is powerful to show that the public is already mobilising itself.

• Move your money out of fossil fuels
For banks see www.marketforces.org.au, for superannuation see www.superswitch.org.au.

• Power your house with clean energy
Install solar if you can, or buy renewables-friendly electricity. Disconnect from gas – see www.greenelectricityguide.org.au.

• Be a conscious consumer
For example, buy only what you need, and buy things that last. Recycle. Upcycle.

• Plant trees
For drawing down excess carbon in the atmosphere. For example Earth Day, Trees for Life 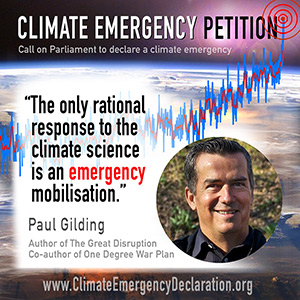 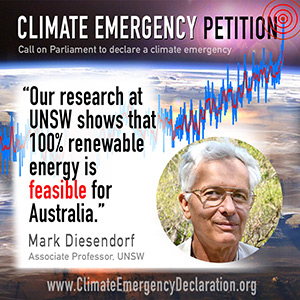 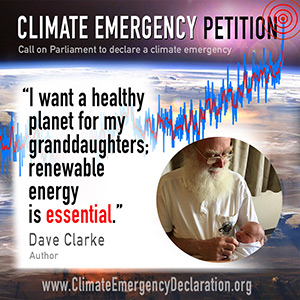 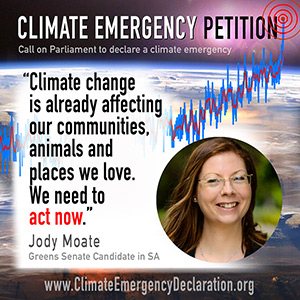